Here is the Halloween banner that I finished up this past weekend. The battery in my camera finally charged and I was able to take some pictures this afternoon after work. I had a blast making it. Thelarger bats are some I picked up from Michael's. The witches hat was cut from the Mini Monsters at 3 1/4". The scallop for BOO was cut at 3 1/4" from the Gypsy Wanderings cartridge. The circle was cut at 2 3/4" from the George and Basic Shapes cartridge. The letters for the word BOO were cut at  2 3/4" from the Lyrical Letters Cartridge using the Jumbo creative feature. I then embossed them with some black embossing powder. The small bats are from the Wild Card cartridge and then glittered. I added some tulle behind the letters and used the Martha Stewart Spider Web border punch for the strip across the top of each pendant that was cut from Chipboard. The patterned paper is from the Recollections Paper pad that I bought last year. The trims along the top of the pendants are also from Michaels Recollections trim collection.
Posted by Deanna Mulder at 12:54 AM

Promote Your Page Too 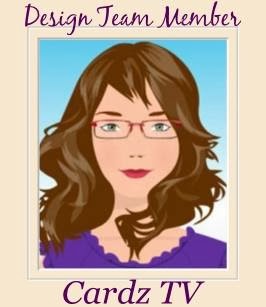